Married at First Sight is entertaining Thursday night television and great social commentary for Twitter users.  The show features relatively successful Americans who’ve been unsuccessful in love and are ready to fast track the dating game, and trust experts to find them marriage-worthy matches. Our world can make marriage seem like a relic with high divorce rates, multiple apps for easy hook ups and varied relationship configurations.  Despite all the options on the market, Married at First Sight is in its fifth season and folks eagerly chase the proverbial “ball and chain” of monogamy. Of course reality television thrives on the “WTH??!! factor” so whenever I catch up on the series my main questions usually are:

How do they match these daredevils?
The experts might be onto something when they suggest lots of people marry with the wrong motives. Too much heart, too much heat, not enough common sense. So when the panel of sifts through all the profiles and questionnaires they’re actually doing the hopeful singles a favor. C’mon you can’t lie about everything. Hell, I wish I could have done a psych analysis on every person I’ve ever been interested in. That would have saved me hours of awkward conversations, tense misunderstandings and infinite probing.

Let’s be honest, western culture makes dating seem like a lucrative hobby, but really who has the time, the energy, the money? All in the pursuit of love, companionship, matrimony? I suppose these things could push someone to marry a stranger.

But to what end?

What do they have to lose?
Sometimes the more we talk about our ideals in a mate the more unrealistic the person can begin to seem/appear. Follow me. Have you ever heard a friend describe their ideal partner? You probably have to raise your hand to get a word in. Which can make it hard to take them seriously. For the 6 singles that give their “freedom of choice” to Dr. Pepper Scwartz and her team, it must be a roller coaster. Through a survey/questionnaire, they have to pinpoint what they genuinely view as priorities in a mate, and in a relationship partner. Then they have to commit to the experiment. Holy cow! The premise alone is frightening. Essentially, it’s an arranged marriage, except these “experts” aren’t even your parents. You’re trusting that these “experts” know what the hell they’re doing. Speaking of spotty track records…

Can we trust the numbers?
From the last four seasons, ten couples are divorced. Leaving Dough & Jamie, and Jason & Courtney still together. (See More) That is insane. With those odds, why would you agree to any of it?

There is no prize. Participants do receive a stipend, but “the stipend is to cover per diem for time spent filming and any time away from work.” You are now going to tell me that marriage is the prize? Yes/No? Okay, then your partner is the prize. [Why do I keep thinking the “Price is Right”?]

What concerns me more, is the reality of it all. You are actually making an oath. As with any contract (or covenant), there is a verbal and written agreement. It’s not like you aren’t legally bound to the person you’ve been matched with. This makes this show kind of problematic for me. There is a generation of young people growing up, watching people marry, and then divorce for convenience. All the advice they gain from the experts, and any lessons they learn from these relationships, is probably negated by watching these couples walk away, one by one.

So why am I watching this?
Okay, I will admit that I binge watched the entire first season (while it was still on FYI). I could not pull myself away. I wanted to see the carnage, and the chaos but I also wanted to learn from the experts and the couples. I wanted to see what being married might be like. It’s a curious pull. Many of us do want to be married, but we’re not even sure it’s something we’re capable of doing. It’s not often that you get a bird’s eye view into a couple’s marriage. [Which the Church should probably look more deeply into.]

As I listened to the “experts” dissect the relationships, the more I realized that I hadn’t really thought about the work that I needed to do on myself before coming into covenant relationship with someone. To begin with, I was fascinated (at the time) with how desperately they tried to build trust. They essentially started doing things in reverse: wedding, counseling, dating, getting to know each other, meeting each others families. At the same time, in a  strange way, I admired their bravery.

Why not just jump in the deep end?

Fast forward to the present and here I am now, months away from my own nuptials. In a lot of ways, Nicholi and I also didn’t do things the “traditional” way, but I’m actually okay with it. We’ve tried our best to build our relationship around our faith, and our friendship. Which I think can be hard for many of the couples on the show, for a number of reasons. Including but not limited to:

1. Past relationship hurt/ Lack of healing from negative experiences
2. Cynicism (particularly around marriage)
3. Fear of success/fear of failure
4. Warped perceptions of the opposite sex
5. Very different religious beliefs
6. THERE ARE CAMERAS ROLLING!

It must be really challenging to try to tackle those issues when the cameras are off, much less with millions of viewers watching. Even in the last few months, Nick and I have had to push through a lot of doubts and questions, and tackle a lot of unspoken expectations through premarital counseling. I can’t imagine trying to do all that we’ve done thus far with a complete stranger, much less in front of a production cast. But then, that leads me to give major kudos to the two couples that made it. 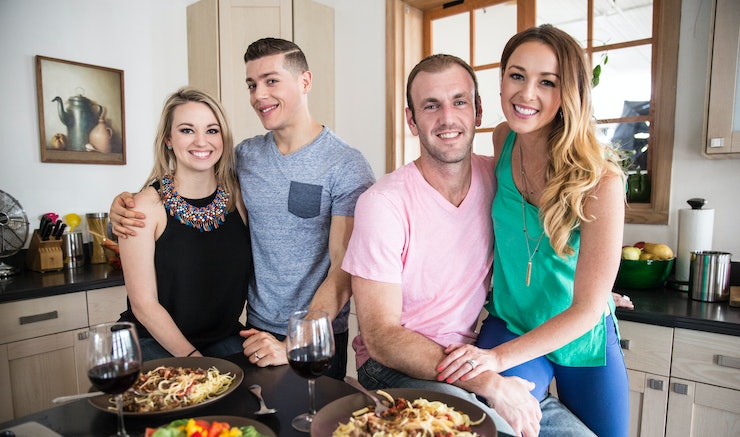